This article in the NY Times does a great job of clearing up confusion regarding whether or not employers can require their employees to get vaccinated.

Cambridge Consulting is proud to be named by Forbes as one of America’s Best Professional Recruiting Firms for 2021! Thank you to everyone who voted for us!

We are excited to be celebrating our 30 year anniversary! 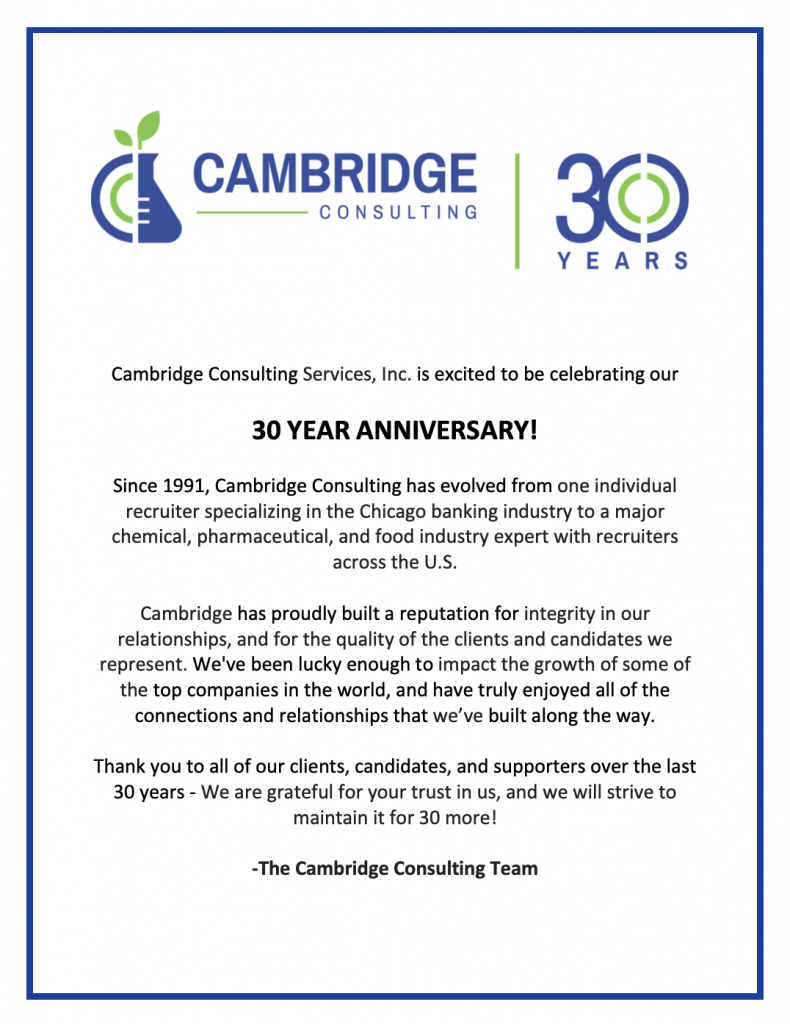 Young Job Seekers: You Need to Read this Before You Interview! Part 1

If you are a job seeker twenty-two to thirty years old, you need to read this before you go to your next job interview. In the last few months, we have had several qualified candidates lose out on lucrative job offers because of their communication gaffs. And, no, I’m not talking about something as obvious as dropping the F-bomb to the President of the company. I’m talking about the uniquely Millennial behavior of communicating on an overly familiar basis during an interview.

For years, you’ve heard the complaints about Millennials coming across as “entitled” and disrespectful of authority. By now you’ve also heard the contradictory research, which proves that Millennials can be extremely hard working, loyal employees who can contribute a great deal to an organization. Still, the perception persists… and that impression of the entitled, overly familiar young man or woman is VERY hard to overcome once it is imprinted on the mind of a hiring authority. Read on for tips on how to avoid this common “Millennial” mistake.

So, what exactly do young interviewers do that brands them as “entitled” or “disrespectful of authority”? For starters, treating an interview like a casual hang-out with your college friends at the local craft brewery. Hiring Managers are not your friends, your “bros”, or your “besties”. Your new potential boss is not your mom and the HR Manager is not Gramps. Just because an interviewer is friendly, does not mean the two of you are close. Being overly familiar and casual in an interview can cause an interviewer to see you as unserious, flippant, or unprofessional.

One very-well qualified candidate said “Ya know” and “Sure thing” so many times in her first meeting that the rest of her interviews for the day were cancelled. The employer told us, “ I would NEVER put her in front of a customer with those communication skills.”

In another instance, as the interviewer provided a detailed description of the job responsibilities, the candidate nodded vigorously, saying “ Coolcoolcool” repeatedly, as if he was hanging out with Matthew McConoughy in a California hot tub. Another young man walked into a conference room for a panel interview with four C-level executives and greeted them with “Hi, you guys!”, then sat down, stretching out with his arm over the back of the chair next to him and grinned. His candidacy ended right on the spot.

If you read that last paragraph and are thinking, “What’s the big deal? They were just being themselves!” Let me tell you. First hiring managers and interviewers are authorities. Even though you have a choice about whether or not to accept a job, if offered, the interviewer is “above you” in business hierarchy. With each different strata of authority come invisible boundaries. When you inadvertently cross them, it creates discomfort and tension. Imagine that you are eating out at a beautiful restaurant on Valentines Day with your sweetheart. After taking your order, the server sits down next to you and says: “So how did you guys meet?” In another setting, the question is not rude, and in fact could be considered extremely polite as an icebreaker. But in this circumstance, the server has committed the sin of crossing the invisible line between patron and worker. This violation of expected role behavior is likely to –at least– unnerve you and–at most—irritate you. In that setting, at that moment, you are the “authority” because you are the customer, and a good server knows that. The same unspoken roles and rule apply in business.

Etiquette requires that you treat authorities with an extra layer of deference and respect. This doesn’t mean you are groveling or sublimating your own worth; it just means that you understand the rules of the professional game and agree to play by them. Greeting an interviewer with “What’s up?” rather than “Good Morning” or ‘It’s nice to meet you” is a sure indicator to the interview panel that you either do not “get” the accepted standard rules of professional communication, or worse, you are refusing to play by them. That last perception leads to the impression that you have the dreaded “attitude” problem.

You may be asking; “Why do you have to act like someone else? What if it doesn’t feel genuine?” I’m not suggesting that you change who you are, just that you need to present the most polished version of you in certain situations. Practicing respect and other-orientation does not mean you are selling out. Honoring boundaries and deferring to authority is not only appropriate; it is also politically savvy. Watch the most successful people you know and see whether they are flippant and slangy or careful and deliberate in their conversations with the people in power in their company.

Of course, you can rebel against this status quo, but I assure you it will be at a cost to your career opportunities.

Note: There are certain unique creative markets where formal verbal communication is not required, and can even be a barrier, but even in those worlds the customers, the board members and the all-important investors are likely to live in the world of formal communication, so it’s best to play it safe. Just as the etiquette books say it is better to show up at a party overdressed than underdressed, the same is true with your language. Remember that you can always drop back from formality to more casual speech, if it seems to fit, but you can’t come back from “Yo, Prez! How You doing?” Because that ship of perceptions, filled with your career aspirations, will have already sailed.

Example: Casual vs. formal interview communication—taken from actual experiences of our candidates.

Lucy Davis took a ten-year break from her career in media sales while she raised two kids. Re-entering the market after such a long hiatus was challenging.  Though Lucy was looking for a job running an outside territory similar to the job she had left, the only offer that came her way was for an Inside Sales role that paid $62k– a salary substantially lower than the $70k a she had been earning ten years prior.

Still, Lucy saw this as her ticket back to work and accepted the job. After a year, she applied for a position nearly identical to the one she had before she had left the workforce—Territory Manager for media sales.  Lucy had researched the current salary rates for this position and knew the appropriate range for the job in today’s market was $80-90k. She was looking forward to a healthy bump that would get her back to her pre-baby level; however, when the offer came, Lucy was sorely disappointed. The new company offered her $70k–a full $10- 20k less than what she was expecting. When she questioned the rationale of a salary so far below the norm, she was told that HR was basing her increase on her current salary, not on the responsibilities of the job. They stated that a 10% increase was standard and that Lucy’s request for a 25%+ bump was  excessive. The offer would stand.Lucy accepted the position, reluctantly, because it gave her the opportunity to get back into outside sales, and a higher salary, but she kept her eyes open for a position that would pay the market rate. Six months later she found one and left.

On the surface, a standard 10% increase seems fair. Offering a 10% increase to all candidates who apply for your jobs may seem like an consistent and equitable approach. Of course, sticking with a rigid percentage increase for every hire  that means that candidates who are overpaid according to market standards will need to be given 10% above their already bloated salary.

It is also tempting to see an underpaid candidate as a bargain, like finding the one leather sofa on the showroom floor that was accidentally marked with a clearance tag. If you can get this person for less, keeping your budget a little fatter, then isn’t that just good business? The problem with that thinking is that, unlike that mis-marked sofa, candidates are sentient beings with emotional drivers such as pride, ambition and a sense of fairness. A disgruntled sofa can’t leave you and walk into someone else’s living room. An employee can.

No one wants to feel undervalued.  Underpaying can work in the short run, but a candidate who doesn’t feel  appropriately compensated will– at least– be resentful which could affect productivity and –at worst–look elsewhere for a company who will pay the going rate.

Bottom Line:  Forget the bargain shopping.  Play fair. Determine a salary range that is commensurate with the responsibilities of the role and make offers that fall within that range. If that means you provide a candidate with a 30% pay increase, just imagine how happy and grateful that new employee will be. And gratitude translates into loyalty and loyalty into productivity. Everybody wins.